Ms Tamara Mrkun shared her story in the article in Svet24 newspaper.

“When I first met Mr Dernovšek I thought – here is another guy who is trying to convince me not to give up and die. I did not believe his promises about having more energy. But then it started to happen.”

“At first I had more energy and better blood circulation, then the symptoms of ataxia started to disappear. After three weeks I could hear without the hearing aid. I had a similar breakthrough as Kristjan but with me it happened in only 25 days. After 4 weeks I was able to start walking again after years of being chained to my wheelchair and bed. After five weeks I was able to swim without a board. After seven weeks I started to learn how to dance Viennese Waltz. On the 97th day of my therapy I was able to walk independently, without leaning on a stick or on somebody else.”

Ms Tamara is posting her progress in a Friedreich’s ataxia Facebook group, where you can follow her amazing and inspiring story.

Want to join the discussion?
Feel free to contribute! 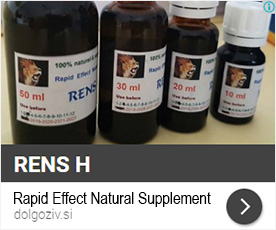 A boy with autism, Žiga, miraculously started talking at the age of 9 (Slovenske... Mrs Saša Barlič sharing her story how RENS helped with her problems
Scroll to top